A Conversation with Anthony McGill 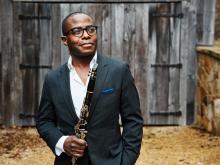 Join ONNY Music Director Kenneth Andrews for “A Conversation with Anthony McGill”, featuring the internationally renowned artist in a 30-minute interview on Friday, April 23 at 6:00 p.m.  McGill will share his thoughts about diversity in American orchestras, his thoughts on various concertos that he performs, and respond to questions submitted in advance when viewers register to attend.

He was originally scheduled to appear in ONNY’s spring concert on April 24 and 25, both performances of which were canceled due to the ongoing pandemic. ONNY personnel are hopeful that McGill will be available to solo in an ONNY concert later this year, but confirmation may not be come until late summer.

Hailed for his “trademark brilliance, penetrating sound and rich character” (New York Times), clarinetist Anthony McGill is one of classical music’s most recognizable and brilliantly multifaceted figures. In addition to his dynamic international solo and chamber music career, McGill is principal clarinet of the New York Philharmonic—the first African-American principal player in the organization's history. In 2020, McGill was awarded the Avery Fisher Prize, one of classical music’s most significant awards given in recognition of soloists who represent the highest level of musical excellence.

Free registration is required for this event using the "Purchase Tickets" link below.  After registering, there will be an opportunity to submit a question for Mr. McGill.  Please register by Wednesday, April 21 to ensure that your question is considered.