POTSDAM - Beethoven's ever-popular Symphony No. 4 will be featured in the spring concert by the Orchestra of Northern New York. Performances are 7:30 p.m., Saturday, April 25 in SUNY Potsdam's Hosmer Hall and 3:00 p.m., Sunday, April 26 in the Dulles State Office Building, Watertown.

Described as "a slender Grecian maiden between two Nordic giants," (referring to his Symphonies 3 and 5), Beethoven's Symphony No. 4 in Bb Major, Op. 60 will anchor the program. In general the symphony is sunny and cheerful, with light instrumentation in a manner that recalls the symphonies of Joseph Haydn, with whom Beethoven had studied a decade before. The Fourth Symphony  contains many aspects that show his growing strength as a composer.

Also to be performed are the brilliant Dances of Galanta by the magnificent Hungarian composer, Zoltan Kodaly, and the magical Overture to The Abduction from the Seraglio by Mozart.

Founding music director Kenneth Andrews will conduct the 52-piece orchestra. The maestro also will host a pre-concert conversation featuring members of the orchestra 45 minutes before each of the concerts.

The orchestra's mission is to enrich the quality of life in Northern New York through live performances of orchestral music by outstanding musicians and to emphasize the engagement of area youth in the appreciation of music.

POTSDAM - Have you ever dreamed of conducting a professional symphony orchestra?  This might just be your lucky year! The Orchestra of Northern New York is raffling off the chance for someone to conduct the 60-piece Orchestra in a selection at its summer Pops concert, "ONNY Goes To The Movies," on July 1, 2015 in Hosmer Hall at SUNY Potsdam.

Drawing is Saturday, April 25 during intermission of the spring concert, Beethoven's Fourth Symphony, in Hosmer Hall.

The winner gets two free conducting lessons from Music Director Kenneth Andrews, and the opportunity to conduct a march by John Phillip Sousa at the July 1st concert.

Anyone, 18 or older, may purchase a raffle ticket to win this prize or one of the other prizes in the 7th annual season raffle.  Other prizes include: "Siam Classic Inn & Spa Experience"- two free nights and gourmet breakfasts at the only Thai-style bed & breakfast in the region; "Co-Op Bread Blowout" - one loaf a week of your choice of mouth-watering bread for 12 weeks; "Fun for Foodies" - an evening of delicious food from Chef Wally Siebel, cooked and served in your own home, with waiter Maestro Kenneth Andrews; and "Gift Certificate Delights" - one hour massage from Bliss Massage, a manicure from Inspired Healing Salon and Spa, and a $20 gift certificate to the Carol Lee Shoppe. 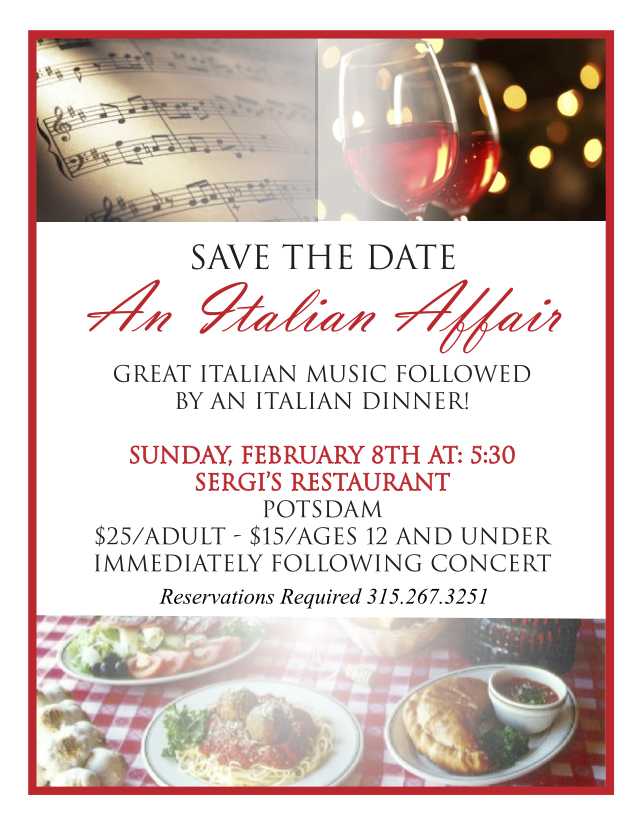