As a flutist, Mr. Andrews performed as Associate Principal Flute with the Montreal Symphony Orchestra and has been Principal and Guest Principal with several other orchestras and festivals. He has performed under such conductors as Zubin Mehta, Leonard Slatkin, Jean Martinon, Charles Dutoit, and Franz Paul Decker. As a recitalist, soloist with orchestras, chamber musician, competition judge, and clinician, he has performed throughout the United States, Canada, and Europe and has been featured on public radio and television. Mr. Andrews is a former first-place winner for the flute division of the Pittsburgh International Wind Competition and has performed several summers at the Canna International Chamber Music Festival in Italy and has appeared several times as a guest soloist or conductor at the Garth Newell Festival in Virginia. 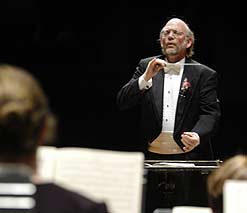 Mr. Andrews holds the rank of Distinguished Service Professor Emeritus from the Crane School of Music and SUNY Potsdam, where he taught for 33 years.  He served as Professor of Flute, directed of the Contemporary Music Ensemble for 31 years, coached chamber music, conducted the Crane Chamber Orchestra, served as Interim Music Director for the Crane Symphony, performed for many years with the Potsdam Woodwind Quintet and created the Potsdam Baroque Chamber Players.  His numerous awards have included the President’s Award for Excellence in Research and Creative Endeavors, the SUNY Chancellor’s Award for Excellence in Teaching, the New York State United University Professor’s Excellence Award for Outstanding Professional Performance and Community Service, the SUNY Chancellor’s Award for Research and Scholarship and the St. Lawrence University North Country Citation for enhancing the quality of life in the North Country.  Mr. Andrews served as a Guest Artist on the Faculty at Indiana University (Bloomington) and Concordia University (Montreal) and on the faculty at Ohio University.  He has been Artist-in-Residence at the Bay View Festival and Resident Artist at the Banff Centre for the Arts (Canada).